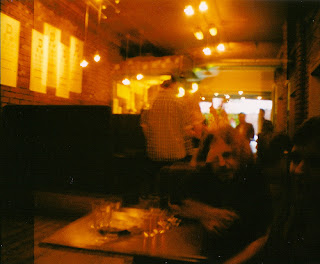 I meet him for the first time at Manchester Blog Meet in Common Bar in Manchester’s Northern Quarter, over the road from the Manchester Digital Laboratory. It’s Tues 28th August and I’m stood in a suit and Hawaiian shirt after having a “Tropical Tuesday” in work. I’m slowly getting steaming on Bullet bourbon whilst The Doors’ Light My Fire pumps out of the speakers, which are hidden amongst the pop culture paraphernalia including giant monochrome photographs of John Candy, Patrick Swayze and Steve Irwin. It isn’t clear if the chalk drawing of the lion is referencing thisweek’s alleged sightings of a big cat in Essex.

The Blog Meet attracts a crowd of the city’s bloggers, including:

Sarah Clare Conlon from Words and Fixtures covering literature events in the city. She also ghost blogs on numerous other sites. So if you want someone to help create content on your blog… WHO YA GONNA CALL?!

Pete, whose site Having a Party Without Me is a handy guide to Manchester’s gig scene, complete with interesting little doodles.

Fat Roland, who runs two blogs: Fat Roland on Electronica covers the world of Electronica music, and has been covering the niche since 2004; Italic Eyeball is an experimental fiction site which he set up much more recently.

Curator of the Manchizzle and Blog Meet organiser Kate Feld welcomes us all and, reminding us that the Blog North Awards, formerly the Manchester Blog Awards, are now open for nomination. The site will be taking suggestions until the 7th of September, so if you can think of any blogs you’d like to nominate… 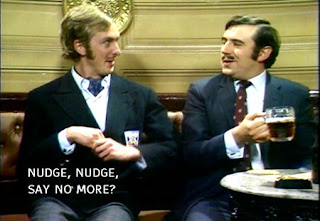 The Blog North Awards is now in association with Open Stories, “a Manchester-based arts organisation that develops digital literature and writing projects.”

The Blog Meet is sponsored by the very trendy Revolve Boutique Manchester, ran by Sophia. Sophia ran a Clitheroe art gallery until running into financial problems. Taking a detour, she set up an online dress agency for women who don’t have time for Ebay. For a small fee, she will buy and sell clothes for you (provided you’re a woman, presumably), providing a photoshoot of the clothes and attractive Revolve packaging for the merchandise.

Thanks for the bar tab, Sophia!
Posted by CageFightingBlogger at 21:10

Sorry that I couldn't get there- work got in the way, grrr, next time.... Off to nominate a certain blog now ;-)

Haha! You missed out Chrissy, it was a good night! Well, that can only be one of two blogs... ;-)

Can you hurry up and post some embarrasing pictures from Brighton please? All this talk of blog meets makes me want to implode and shrink down to a singularity of self-indulgent back slapping.

Thanks for the mention on your blog. Glad you enjoyed yourself. Sophia x