Review: Back to the Future Part II 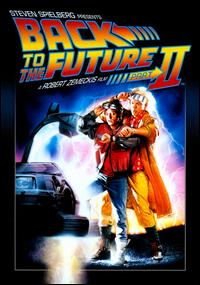 “There’s something very familiar about all this,” says an aging Biff (a prosthetic- enhanced Thomas F. Wilson), watching his Grandson and his friends fall foul of the efforts of Marty McFly (Michael J. Fox).
The audience may feel a similar sense of deja vu as the script of the original film is re-hashed and thrown into an uninspired vision of the year 2015. This time it’s not Marty’s father but his son- a certified future-wimp- that needs putting on the right track with a rhetorical kick up the backside.
It’s a shame that writers Zemeckis and Gale weren’t given similar treatment- instead they recycle plot, jokes and actors (Fox plays three characters, none with the zest of his role in the first film).
What we see of the future world is mostly a cop-out. The “retro Eighties bar”- instead of highlighting how culture is fondly remembered and replicated- just shows a lack of imagination regarding what the future might hold in store, and the trends and lifestyles of the future world are obscure (dust covers on ties? Why?). Opportunities to predict and portray a believable future are painfully overlooked by the writers.
Meanwhile, Doc seems thoroughly annoyed that Marty want to make riches through time travel- the rest of us are just annoyed that Zemeckis and Gale’s vision of the future is so dull and fleeting.
It isn’t long before Biff finds his way back in time- conveniently to 1955 where the first film was set- to make his younger self a rich man. (Presumably Biff chose this year, out of any in his life, purely for the financial advantage of the film studio- the re-use of stock footage and sets must have pleased Universal). It is at this point you may need a good grounding in physics to stay in tune with the plot, as Doc explains alternative strains of the future. The story becomes almost as convoluted, and nowhere near as graspable- or enjoyable- as the original.
The middle chapter is a lull in the excitement of an otherwise memorable trilogy. One only wishes the flux capacitor could go back to the late eighties and change the script of this odd instalment.
Posted by CageFightingBlogger at 10:17 No comments: