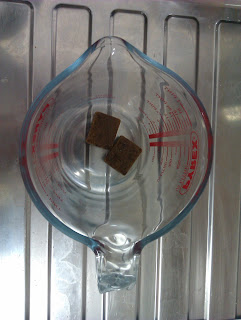 I figured it was about time I knuckled down with the issue of learning to cook. I've done roast beef a couple of times now, with varying success. 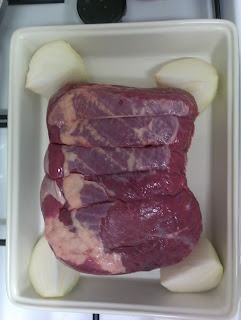 Keda Black once again doesn't think outside the box with her instructions- I'm not just going to eat a lump of beef on it's own, am I? Yes, I'd think for myself and cook veg and potatoes, but at what point do I put these in the oven? And how and when do I baste them? And which oven shelf is best? None of these issues are touched on.

So, for my fist attempt, I just bunged the beef in the oven for 45 mins and it came out medium rare. Fine. I took it to my mums, we had a family gathering and we served it up with a pile of other food.

I made a second attempt some weeks (yes, weeks) later.

The instructions were for a Kilo of beef. As mine was 1.2kg I increased the cooking time to accommodate. I looked closer at the instructions: Keda was suggesting I quarter an onion and she gave instructions for making gravy, so I followed those to a tee. That STILL isn't a meal, though. You put veg and potatoes in a roast dinner. Where was the inclusion of this in the recipe? Void. 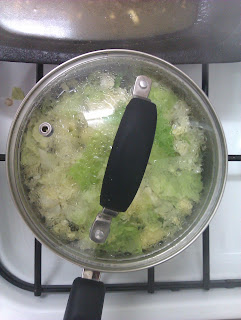 Also omitted was the suggestion to purchase sirloin beef for this meal, not slow roast as I did. I had no idea there were different types of beef joint. Again, Keda assumed I knew this. 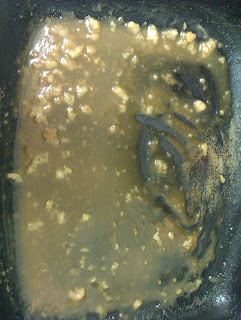 I tried to make gravy as instructed. This evolved as a lumpy mixture of flour and stock, as Keda did not suggest putting the mixture in a beaker and shaking it vigourously. Mum always does this and it comes out fine. Mine did not. Strangely, it tasted like the curry from the local chinese chippy.

The meat was more medium than medium rare, so the increased cooking time was unnecessary. 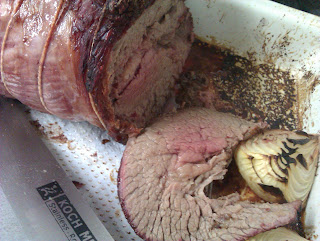 Serving the meat was tricky both times as I don't have a carving knife with a serrated edge. I may make a purchase as I'm likely to be trying a few meat dishes again at some point.

But fuck me, this was hard. And it's hard because the book that I've been plodding through- for over a year- isn't clear enough. It's not a book for beginners. So, if you're learning to cook and you have a memory difficulty like I do, a book like Keda's Classics may not be approprate. The penny has dropped. Time to pick a different book. 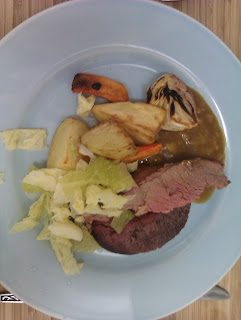 Good work mate. The extent of my 'cooking meat outside of a curry or stew' experience begins and ends with steak. Never attempted a roast of any kind, and I totally agree with the vegetables observation: when the fuck do they go in?! As for gravy? Bisto every time!