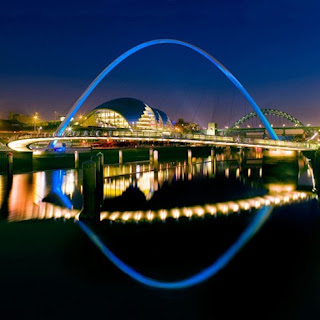 Night. Cold. A river front- The Tyne, Terence guesses. Reflected in the water: a shimmering, metallic blob- a large, pupae-shaped shiny building. To the left- a sturdy but shoddy bridge linking the riversides. New rubs shoulders with old.

The breeze bounces straight off the river and into Terence's tiny eyes.

I've gotta salvage some dignity from this excursion, Terence thinks. I want to go back feeling like I've done something.

Edgar is gripping the railings at the river's edge. Terence leaves the group, approaching him from behind. Edgar's silver shoulders rise... and fall... in the moonlight.

The ape could squash Terence like a steamroller if he wanted.

“Did they rip you off?” Terence asks quietly.

Edgar's shoulders pause, like he's stopped breathing. He turns. “Who told you that?”

“Nobody. They did it to me too. I had to borrow off Jacob.”

A voice cuts in. “And Jacob mustn't tell anyone, right?”

Terence turns. Steam churns out of Jacob's nostrils in the frozen Geordie air.

Time to man up, Terence thinks. “Jacob. You saw what happened. If I'd have known it wasn't just me being a mug, I'd have kicked off.”

But Terence thinks, Would I? I wish I had, now.

The rest of the animals straggle over.

Terence comes clean to them all.

“Fucking hell,” says Harry. “They saw you coming, didn't they!”

“We went 'round a few bars," says Terence. “Regular bars. That's all. That's our story, until Fluffy hears otherwise. Then we play it by ear.” He stretches his wings. “There's a few hours to kill 'til the train.”

Terence turns. He paces off down the river front, focussing on a giant electric-blue arc in the sky- some kind of backlit bridge straddling the river, the water's reflection giving the light a loop appearance.

A portal, he thinks.

He wants to pass through it, straight through the middle, just over the water's surface, and burst the space-time continuum, landing back at Oldham Zoo in a split second- channelled straight back onto his isolated perch.

Terence shakes his head clear. Pretentious bastard. It's no wonder you haven't got a girlfriend.

He looks into the black water, passing under the bridge like the events of the night.

I just want to go home. But I guess I'll have to wait.
Posted by CageFightingBlogger at 19:27


Are you in bad need of love spell to bring back your ex lover or reunite your marriage? contact Dr BAKABA for fast 48 hours solution. I had a problem with my husband a year and six months ago, which lead us apart. When he broke up with me, I was confuse and did not know what to do to get him back, I felt so empty inside. Until i came across Dr BAKABA on the internet on how He has helped so many people solve there various problem. I emailed Him and I told Him my problem and i did what he asked me to do for him to help me, to briefly make the long story short, Before I knew it, in less than 48 HOURS, my Husband gave me a call and he came back to me and told me he was sorry about what was going on between the both of us. Finally I am writing this testimony to offer my thanks and deep gratitude to you Dr BAKABA for keeping to your words and your promises in bringing him back to me in just 48 hours of your powerful spell casting, and for using your gifted and great powers to bring him back. If you need his help, you can email him at ( bakabaspelltemple@gmail.com ) or add Dr BAKABA on WhatsApp ( +2347063836098 ) or call him

My name is Alfred Betty, i live in UK. My life is back!!! After 1 years of Broken marriage, my husband left me with two kids, I felt like ending it all.I came across several testimonies about this particular spell caster. Some people testified that he brought their Ex lover back, some testified that he restores womb,cure cancer,and other sickness, some testified that he can cast a spell to stop divorce and also spell to get a good paid job so on. It was very amazing, i also come across one particular testimony, it was about a woman called Ruth, she testified about how he brought back her Ex lover in less than 2 days, and at the end of her testimony she dropped his Email.After reading all these, I decided to give it a try. In just 48hours, my husband came back to me. We resolved our issues, and we are even happier than ever. Dr,Shakiki you are a gifted man and i will not stop publishing him because he is a wonderful man. If you have a problem and you are looking for a real and genuine spell caster, Try him anytime, he is the answer to your problems. (Lordshakikispell@yahoo.com ) Or  WhatsApp Him Or Call +2348071398555. Via Web Sit: https://lordshakikispell.webs.com/