Just over a month ago I told you I had a plan to get my blog up to 100,000 hits by the 18th September, using Twitter, this blog and a third site.

It wasn't an easy ride, though, (no pun intended) and there were lots of ups and downs along the way (okay, pun intended). I approached 903 people for an RT. Like Frank Drebin once said in Naked Gun 2+ 1/2, “It's like having sex. It's a painstaking and arduous task that seems to go on and on forever, and just when you think things are going your way, nothing happens.”

Getting someone to RT your blog takes two tweets- one to introduce yourself and your blog, with a link to the site included, and another to ask to retweet the first one with a promise of a good mention on the blog should they agree.

Here's a few pointers I made, throughout the month, about my self-imposed task.

Unfortunately 7 people RTd the wrong post and wouldn't RT the one I asked them to, despite my pleas. 5 people put my @ handle at the start of the tweet, essentially tweeting my blog back at me and me only by copying and pasting the text of the tweet into a new one. Why anyone would do that when you can click one button to properly RT is beyond me. But, I suppose that out of the 900 I asked, 5 isn't too bad. You're going to get the odd person who's not Twitterate.

I had other problems throughout the project. Some people won't promote something uless their name is on it. Others won't promote at all. One girl told me she would if I “took her to England.” Sometimes their followers would give me shit if they didn't like my blog. Another girl replied with a simple “nope”, which surprised me as it actually took her more effort to write that and send it to me than to just hit the Retweet button. My skin certainly thickened over the month!

One downside to this form of promotion is that a retweet is a momentary benefit. It appears in the followers' newsfeeds only to be piled on top of by hundreds of other tweets from possibly hundreds of other followers. If they don't see it within minutes of the RT, they may never do. So the instant surge of hits is helpful, but in a different way than leaving a comment on a blog post. That post could be hit on through Google searches at any time in the future. 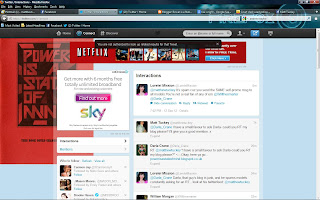 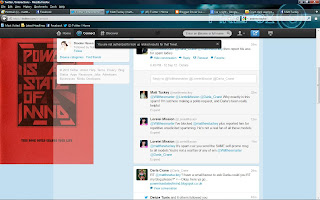 It didn't occur to me that this was a form of spamming as I only approached each person once, and if they didn't respond, I moved on. But after one of Darla Crane's followers showed her displeasure, I asked my friend Tomleecee if he thought what I was doing constituted as spamming. “Yes,” he replied. “And a little neurotic.” Hmm.

I personally don't think it is spam as I addressed each person individually and engaged in conversation when appropriate. Besides, if it was spam- which it's not- wouldn't the spammer be the retweeter filling up the timelines of thousands of people, as apposed to the guy with less than a few hundred followers?

Still, I thought, if my Twitter disappears at least my blog will still be operational. So I figured it was time to go for broke. I cranked up the tweeting and the RTs kept trickling in, but as the deadline closed it became obvious that I wasn't going to make that 100K page view target unless something incredibly radical happened.

So who gave me the RTs and the exposure to new audiences? Find these people by simply typing their name into Twitter's search bar. They are all worth a follow.

Lana Sands (1K) Ms Sands' words: “I didn't retweet ur blog cuz u asked,, but becuz I really enjoyed it! I like ur "ode 2 Beyonce". Great skillz Matt..”

Kid Dynamite (1K) I retweeted his fetish site as he asked.

Brianna Beach AKA Goddess Brianna (3K) Ms Beach RTd a few weeks later, which made a pleasant surprise. Followed back. She RTd a second post off her own back as she's so nice. Her tweets are syndicated on her site, whereby I got some extra traffic.

Bella Blaze (5K) Her words: “Will you buy me a present?” Followed back

Clara Beau (6K) Ms Beau asked me: “Depends, City or United?” referring to the two Manchester football (soccer) teams I live near. I said I'm interested in combat sports only. Although I also regaled the time I got stuck in Old Trafford's lift with a group of hot women at my graduation ball. This was a good enough anecdote to get me an RT.

Sasha Sparks (6K) Twitter slipped up when Ms Sparks fired out the RT. I only got notified 23 hours later, and through email, not in my mentions. Her message was lovely though. “no prob! Wish more ppl could learn from u- just b direct, honest & respectful- & doors will fly open for u!”

Kaz B (6K) Followed back

Mari Possa (7K) When I checked her profile I found she already follows me. Word must be getting around!

Scarlett Fay (8K) Says she “expects a warm reception if she comes to England.” If you come to the North West, Ms Fay, it's guaranteed.

Krysta Kaos (9K) RTd her site in return, as she asked. Followed back)

India Babe (9K) A girl from my home city of Manchester!

Laura Still (10K) Followed me first. Presumably my name is doing the rounds in the industry!

Nicki Blue (24K) Followed back, and thanked me!

Bobbi Eden (112K) Her words, in relation to my Ten Predictions post: “Cool stuff. Although i think that nostalgia will NEVER die ;) RT coming. ;) Good luck.”

And my top retweeter... 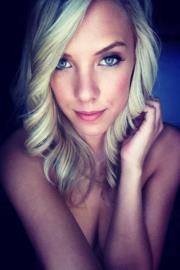 Here's how my stats looked by the end of the month.

At the peak, when I was asking all of the regular tweeters, I was getting 1200 hits a day.

In conclusion, I can't thank all the retweeters enough- you didn't have to do as I asked; you did it out of kindess and I appreciate it. I think that, in retrospect, a task like this can become obsessive- I was on the edge of my seat waiting to see who the next retweeter will be, and how it affects my stats. Focussing on it for a month can take the balance out of your life. You forget to do housework. You run out of milk. And, like Lindy Lane suggested, it is very nerdy. I would say that asking for retweets- whether from porn stars or anyone else- could be a helpful addition to your blog marketing activity. Just upload your post, share on your own social media sites, comment on other blogs, ask for a retweet.