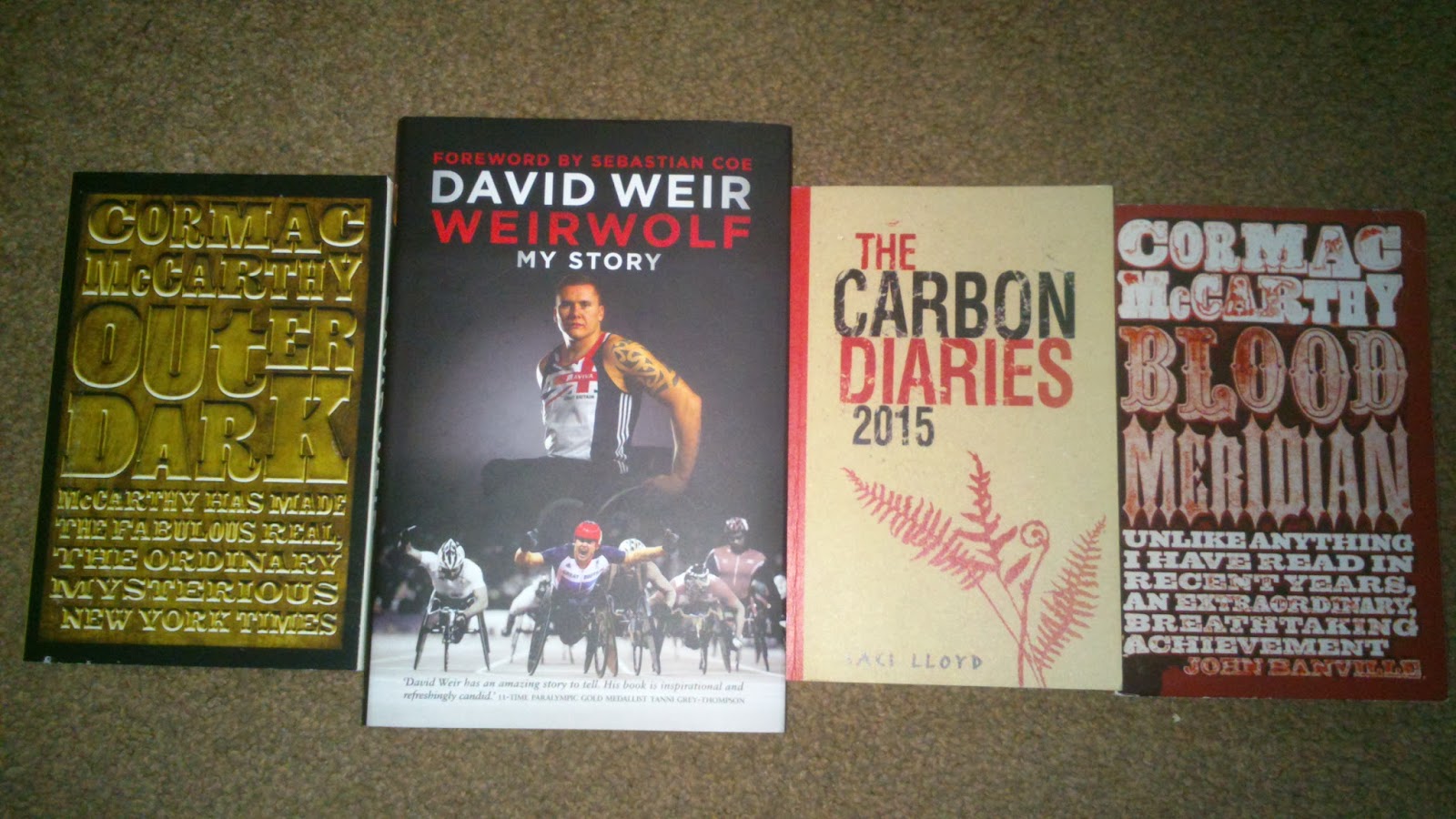 I've been completely immersed in the world of books these last few weeks. After spending December juggling Christmas shopping, working and reading, I decided to use the relatively quiet weeks in January and February to have another shot at reading as much as possible for a month.

Cormac McCarthy weaves a riveting tale of a brother and sister searching for their incestuously-conceived child in early 1900s Appalachia. A bleak, brisk story, OD displays McCarthy's mastery not only of storytelling (the most gripping scenes involve pigs, boats, disasters and some very dodgy characters) but also of his grasp of the dialect that ran through the Deep South at that time.

One of the techniques that marks McCarthy's work out as being of such a high standard is that his texts completely lack speech marks. His characters voices are so unique and believable that you can tell when a paragraph is starting with speech as opposed to description, and you know from the first couple of words which character is speaking. McCarthy's showing off with this format, but he gets away with it masterfully. A terrifying read.

I have problems with autobiographies. The people who write them are, usually, not writers. The books suffer from clunky prose and a strange blend of colloquialisms and journalistic descriptions, obviously suggested by the editor. When the writer is a sportsman, this is usually more noticeable than ever.

Paralympic gold medallist and wheelchair racer David Weir has this problem. The story he has to tell is a fascinating one- a boy born without the use of his legs, who grew up dealing with discrimination and poverty who went on to win 6 Paralympic gold medals in the Beijing and London Games. The problem is that Weir, with his editor David Bond, take a unique, dynamic true story and make it mundane right from the first line: “The routine is always the same.” This may be true, but don't start the story with familiarity and banality! There are a few scatterings of tedium throughout what should have been an eye-opening, emotionally-charged autobiography. Despite this, and the occasional doubling up of words and general lax editing, it's a good read and an eye-opening account of the attitudes disabled people can deal with today, and how one man defied them all.

By the way, I read a signed copy.

Brown's role morphs from ordinary college girl to local hero battling the floods and trying to keep her community together whilst trying to snare the local musician love interest Ravi Datta.

The book is written in the form of diary entries and of emails sent from Brown to her friends. The story may be a good one, but the format was a little unrealistic: why is she sending emails? Wouldn't a social media site- one similar to Facebook or Twitter- be more popular? They were in 2008 when the book was published. More to the point, some of the text of the story is presented as a crinkled printout of an email slammed into the middle of the chapter. Why would the narrator have printed this out at all, particularly during the eco-crisis on which the story hinges?

Spoiler: Towards the end of the story, the floods take hold and she's forced out of her house. She grabs a few essentials- mostly clothes. Would she really have taken her diary? Maybe, I suppose. And, from the start, would she not be writing a blog as opposed to a personal diary?

Gripes aside, it's a steadily rising, effective thriller and the first teen novel I've read in a LONG time. Given the state of the Somerset Levels at the moment, it's also prophetically accurate.

This was a signed copy too.

An unnamed teenage boy in the 1850s South USA joins a group of scalp-hunters, led by the enigmatic and sadistically violent Judge Holden, and they travel west butchering every native they can find, only to be rewarded by riches on their return. The Yuma and Delaware tribes are just as bloodthirsty as the American invaders, who retaliate with devastating attacks, and The Kid and his friends soon find themselves cut off from civilisation with the shadow of winter closing in.

Cormac McCarthy's epic western is possibly the most violent book I have ever read. It's more bloody and cruel than American Psycho, more sinister than Naked Lunch, and what's more horrifying is that the story is based on real events. Some critics found the violence too much to bear, but I'd bet a lot of it is historically accurate. It's also brilliantly written: poetic, inventive and unlike any western book or film you will ever have come across.

I had to read it with the Dictionary.com app at my side: references to horse-riding equipment, details of American terrain and geography, species of plant life and the anatomy of firearms permeate the book- but once you've got those definitions you really soak up the world of the protagonist and his gang.

Others had problems with the text- one online review I read had gripes with McCarthy's lengthy sentences. One 250-word unbroken description detailed the arrival of a gang of Apaches riding towards the Americans, wearing the outfits of their former victims. Although a huge mouthful of a sentence, I think McCarthy purposefully elongated this section to bombard us with the same visuals that the Americans were faced with, and the horror and tension that came with it. It was one of the writer's many bold stylistic moves.

A generously lengthy, original tale with a frustratingly brilliant open ending. If you have the stomach, read this book.

So. Four books down. A small amount of space made in my cupboard made. Some awesome reading accomplished.
Posted by CageFightingBlogger at 19:33 2 comments:

Email ThisBlogThis!Share to TwitterShare to FacebookShare to Pinterest
Labels: literature

I dropped by to the Liverpool venue with a gang of friends and watched the AWESOME X-Press 2 on the decks. You might recognise the name from this 2002 classic.

It took less time to drive there from Manchester than it did to actually find a parking space in Liverpool once we got there, but we eventually got parked up and dived into Fleet St Baa Bar. Good eye candy. We moved on to Nation after a drink. At first I thought we'd got there too early as there was no queue on the door, but the club- which was a lot smaller than I thought- took a long time to populate and never filled. The cool air let me keep my blazer on for most of the night, which was the last thing I'd have expected for a club of that type. I'd imagined it as being a similar size to Amnesia in Ibiza, home to the last Cream night I went to.  The club itself is a classic rave venue- probably a former cotton mill or warehouse, cracked stone floors, overhead metal piping.

I recognised the odd song here and there, like this one:


But a lot of it was lost on me, I'm afraid. Unlike The Warehouse Project in Manchester, there was no information on set times so nobody- not regular customers or bar staff- who had any idea who was playing. Good company and some good music. I plan to spend more time in Liverpool soon. Great city. 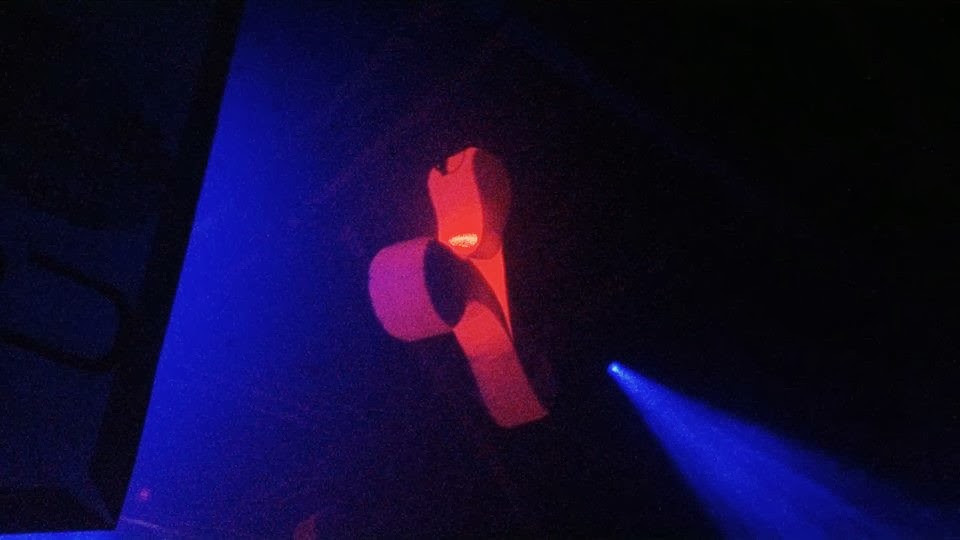 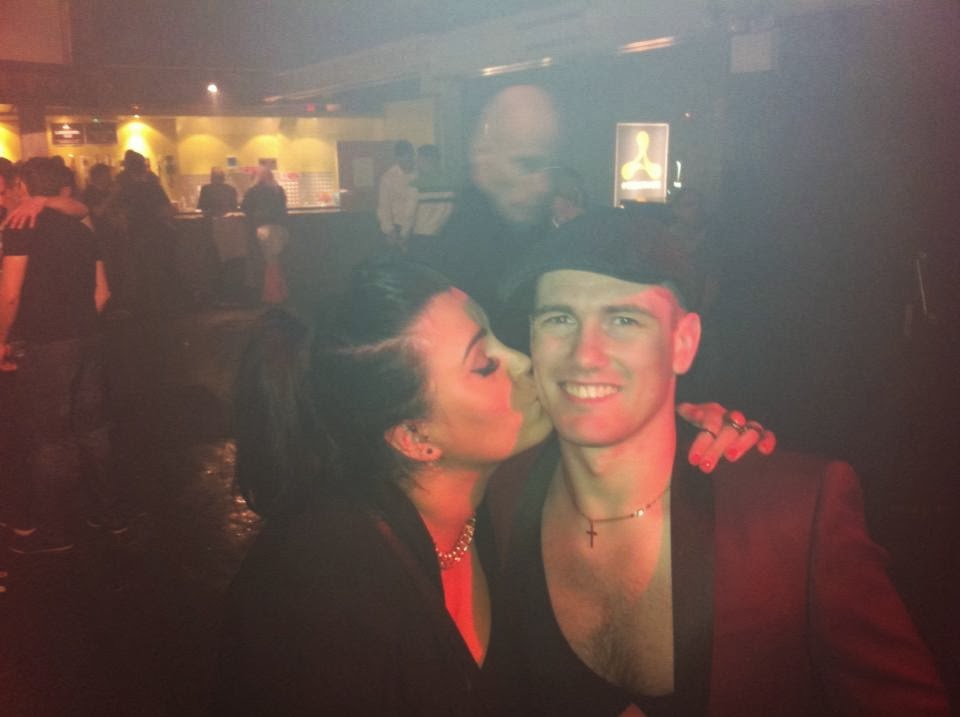 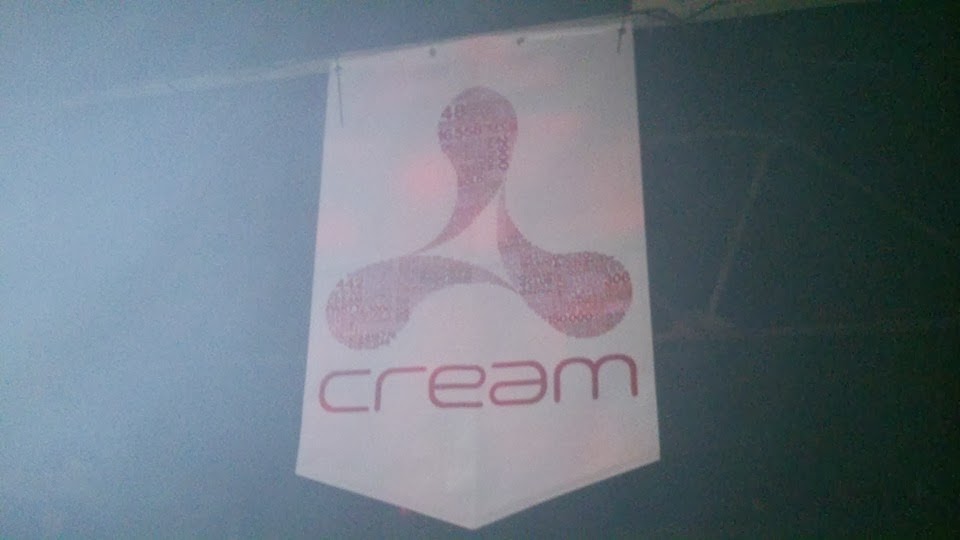 Posted by CageFightingBlogger at 22:52 No comments: