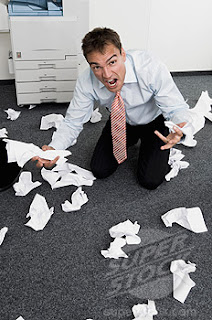 The organiser has a series of slips of paper in her hand. We are asked to pick one.

Now we are asked, write an opening line and a closing line of a story.

What's your opening line- your beginning?

Everybody writes this down.

What's your closing line- your end?

Everybody writes this down.

You now have 15 minutes to link the opening and closing lines with a story.

In our group, the member who picked the B slip gave us this opening line:

“She had often wondered where he came from.”

I had picked the E slip. I brought this closing line to the table.

“He doubted he would ever be allowed back into that library.”

Now the whole group starts and ends the story the same, but with varying content. It's like running a cross-country race. The route is the same, but depending where you step, your experience will be vastly different. Mine certainly was.

She had often wondered where he came from. She thought maybe Germany, or eastern Europe. She didn't know much of these things. But she liked his name- Max Felching. It sounded cultured, refined.

People had warned her that she was kind of naïve, that she should keep her wits about her.

Max hadn't been very talkative. The introduction was brief but memorable, sat around the table in the university canteen. He was classically handsome, sturdily built and arrogantly quiet, which she both loathed and lusted after.

But that was a week ago, and she hadn't seen him since. Was he on Facebook? She wondered. Would it be creepy for me to see if he' on the university intranet?

She opened the library door and booked onto a computer, registering her card, and registering a sense of guilt as well. Was this kind of stalkerish?

She sat down. Opened the intranet page. Searched for “feltching”.

What about the bastion of knowledge, Google? If that didn't know him, no=-one would.

When the pictures loaded, she gasped audibly. What kind of woman, she thought, would let a man do that?

Students on the adjacent seats stopped typing. Two lads laughed, loud. She tried to click the browser button to close, but saw only a tiny egg-timer symbol- the naked man and woman were still clearly visible and, within the last five seconds, a small crowd had gathered behind her, sputtering smothered laughter down her neck.

Library assistants were the only people to use a voice of authority in this room.

She still had no idea about Max. Worse still, finishing her degree would be harder now. She doubted she would ever be allowed back in that library.
Posted by CageFightingBlogger at 20:28

Good to meet you again at the Blogmeet. I'm looking forward to seeing your write up!

Thanks! The writeup is in the way! Good seeing you too mate- keep writing!