Reading and Working Out- Heart of Darkness 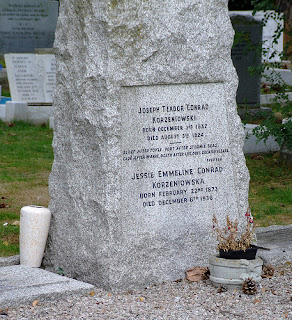 “And you say, Absurd! Absurd be- exploded! Absurd! My dear boys, what can you expect from a man who out of sheer nervousness had just flung overboard a new pair of shoes. Now I think of it, it is amazing I did not shed tears.”

Joseph Conrad was many things. A writer, a sailor- a captain, in fact- and as the opening quote suggests, a bit of a weirdo. But besides all of that, Goddamn, he was one racist motherfucker.

Heart of Darkness, his story of Marlow, a seaman in search of a mysterious ivory trader Kurtz, has dated badly. Published in 1899, the book follows Marlow through the African continent, meeting various rumour-spreaders, travellers and dodgy types- most of whom are inherently discriminative against the local black people- as is Marlow himself. At the end of the 19th century, attitudes like this were no doubt widespread and instilled by a general fear of the unknown- a feeling exacerbated by the need to travel to strange lands to make a living.

If you can see through the prejudice- which, admittedly, the book is drenched in- what remains is a beautifully written, nightmarish tale of British imperialism. It takes a little time to tune in to the century-old language, but thankfully Penguin Classics provides notes to explain details like names of companies that have long-since ceased trading, words that have dropped off the lexicon, and further descriptions of real people who Conrad fictionalised. You'd be lost without this section.

In 1979 Francis Ford Coppola adapted the book into Apocalypse Now, transferring the action to the Vietnam War. I did a dissertation on the film at uni back in '02-'03, so I know the film quite well. It's fascinating to see which characters and story elements were kept and which were cut or adapted. In the book, Marlow is already travelling and hears about Kurtz. He goes to meet him, and Kurtz dies after a conversation with the seaman. In the film, Captain Willard is sent out to kill Kurtz, who is a US General gone insane. The soldier slams a machete into the man numerous times. In Hearts, an unnamed Russian trader tells the protagonist of Kurtz's influence over the locals. In Apocalypse the trader becomes a US photojournalist (played with manic intensity by the brilliant Dennis Hopper).

According to my notes it took 8 hours to read this riveting book on the bike, in three sittings. When the prose is old-fashioned, your brain really has to slow down and translate what's happening from page to mind's eye. It would have been easier to read if Penguin had put the necessary appendices on the same page as the related prose, rather than have a whole section of explanations at the end of the book.

Now- here's where my knowledge ends- if I break from training to eat, then go back to the bike and carry on, my stomach will be full again. So will I then go back to burning food instead of fat? Comment below...
Posted by CageFightingBlogger at 19:14