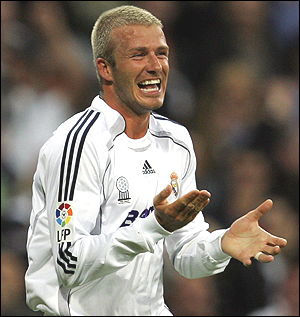 “I wasn't as fit as I would have liked to have been, going to the World Cup, but I'm not sure what difference that made.”
-David Beckham, presumably after the 2006 tournament.

I agree, Dave. Because you are crap. Like every other British footballer.

I realise it's September, and the World Cup came to a close in July, but I still would like to analyse the predictions I posted on May 25th. Check out the entry here:

So. My first prediction: We won't win the tournament. Outcome: Correct. Second prediction: The team that will beat us will have a culture where the men are frequently skilled dancers. Outcome: Incorrect. Germany beat England 4-1. The Germans have folk dance, but it isn't very prevalent. Much like Morris dancing in England. Given their unflamboyant culture, I can't explain how Germany have always been such football heavyweights. Others- who actually follow the sport- perhaps can. Third prediction: We'd get to the quarter-finals. Outcome: Incorrect. Germany beat us in the last sixteen, the stage before the quarters.

Having said that, look who won the tournament. Good ol' Spain. I'm assuming you've heard of the Flamenco and Fandango? They are very popular styles in southern Europe. There are a few other dance styles you might come across in the Mediterranean nation. See here: http://www.whatspain.com/traditional-spanish.html

I mentioned that cultural influences like dance would positively affect players on the football pitch. Spain certainly are “a country more graceful than our own”, as I then put it. That makes me one hellufa prophet. Shame I don't actually like the sport.
Posted by CageFightingBlogger at 17:34