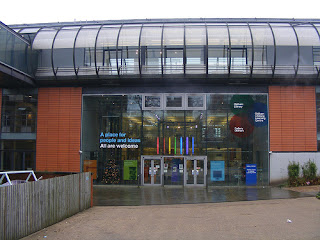 Recently I added Oldham Library to my list of places that I've been booted out of. I'd found a secluded area- a separate room- in which to make a phone call, but soon enough a librarian hunted me down and ejected me. I asked her if there was anywhere I could make a phone call. She said, “outside”.

So Oldham Library now joins a growing list of places that have turfed me out. And I thought I was a nice guy.

Let's have a look at these places. 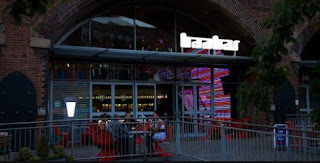 I used to work there. All I did was resign, with notice. They barred me for three months. Company rules. I rolled back in the night I quit. The boss rolled me back out again.

It wasn't actually me being turfed out of this media professionals members club. A friend of mine got so drunk that he fell asleep in his chair. The doormen made me drag him out. He threw up over the flowers in St. Anne’s Square.

Again, not me out of line. And again, same mate is the catalyst! Some pisshead student, standing next to him, kept swaying his way and bumping into him. Zumebar was pretty crowded, so my mate couldn't just move away. Eventually my mate turned, grabbed the gimp by the throat and slammed him against a wall. The music was way too loud for me to hear anything said, but my mate was screaming in this guy's face, neck veins bulging. I grabbed my mate by the waist from behind and dragged him back on my heels. It was at this moment that a big black shape cleaned us both out and dragged us down a fire exit corridor, leaving said gimp inside. The doorman shoved us both out onto the street and slammed the door shut.

“I've got a photographic image of that guy in my mind,” my mate ranted. “Next time I see him I'm going to smash his face into a wall!”

Moments later we're sat at a nearby bus stop, cooling down.

“Pretty funny, wasn't it?” he chuckled. 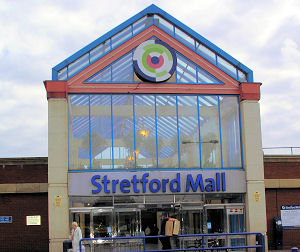 A few years ago I was working as a promoter for local radio station Key 103. One assignment involved the mobile phone brand O2, who had opened a new store. We were offering mystery prizes outside their Stretford branch near Trafford. I'd like to give a big heads-up to the Stretford Mall security staff who frogmarched me out of the building and forced me to promote in the rain. You made me the man I am today. 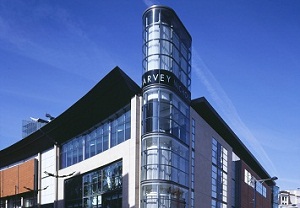 Later that year, and still with Key 103, I worked with Armand Beasley from How to Look Good Naked. Specsavers were looking for The Spectacle Wearer of the Year, and had hired Mr Beasley to represent the campaign. He was also offing makeover advice to the public. My task- woe betide me- was to approach good-looking women in glasses to get them involved in the competition. The things I do for money...

Mr. Beadsley advised us that make-up counters could be the best places to chase up, so I dived straight into department store Harvey Nicholls and fired into the counter girls. It wasn't long before a guy in a suit came over to ask what I was doing. (I stood out in a branded Key 103 t-shirt, cap and bag.) He was a decent looking guy, I supposed, and he was wearing glasses, so I pitched him too. He cut me off with “not in here” and frogmarched me out of the front door.

I then went around the corner to Selfridges (similar establishment, similar beautiful women), where pretty much the same thing happened.

Now. Back to the issue of libraries. Once a venue purely for books, the modern library now has a bank of computers with high-speed broadband. Whether you use them for research or just to hammer Limewire is, to some degree, up to you. The point is that technology is changing us. People research using a variety of mediums- books, the internet, group meetings- and libraries accommodate for all of these. But we also research by contacting specific people with the knowledge and answers we require.

I was trying to contact some social work lecturers at a local university for research on a short story. Why is there no specific room cordoned off for making phone calls? 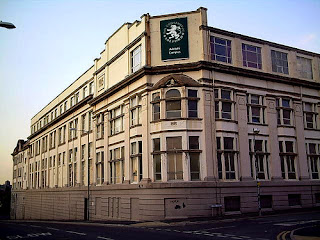 Oh yeah- I was also booted out of Salford University's Adelphi campus library when trying to research for a student film shoot. I phoned outside the doors to the library so I could jump back in to talk to team members. The doors hadn't been oiled, and every time someone walked through, they sounded like a family of gerbils being tortured- through a megaphone. Inside the library was perfectly quiet. Outside was the noisiest place in the building.

I'm pretty proud of this one. Week one: I pulled the DJ's girlfriend. Week 2: I rolled back in and gave her my number. In front of said DJ. On my way out, he gets on the mic: “Yeah, nice try, Matt.” Nice try indeed. Week 3: I wonder in again (to meet a different girl altogether) and walk straight past the DJ booth and into the gents' room. When I come out, there's a doorman waiting for me. “You're gonna have to leave, mate,” he says. “You've done something to offend the DJ.” He has no idea, I think.

Maybe designers should give libraries two conjoined sections- a traditional book-reading area, with computer banks at the side of this, and a separate call-centre-style room for phone calls- possibly also with computers. Just pick your room as you go in, based on what you want to do.

We can find most of the information we would normally need online, and so much fiction is available through electronic kindles and the like. Considering this, it's time libraries had an overhaul. In a few years, they will probably be fashioned as a hybrid of an internet coffee-shop and a community centre- a place where people can go to find answers to questions. Some answers will be in books, some online and some will come from talking to other people. But why set the rules of the library in stone? The world moves too quickly for that.

Oh, and stop reading aloud. The person on the computer next to you is giving you evils... You don't want him to get security.
Posted by CageFightingBlogger at 09:24

Haha! That Zumbar night was ace. That cock ripped my tee shirt though. Still got to find him...