Ghosts on the Dancefloor

Take your best memories of Manchester night life, on paper form. Take a transcript of an interview with a local DJ. Take a personal hobby, and a few of your favourite elements from this. Cut them all up and throw them in a blender. Pour your literary smoothie out on your desk, and form something striking and jagged: an experimental, surrealist autobiographical poem.

26th September: Nexus Art Café in Manchester. The small eatery is in the heart of the Northern Quarter, the city’s creative hub. A Tom Selleck movie is projected faint onto a lit wall. Customers are engaged in games of chess and Trivial Pursuit.

A group of writers gather. Commonword writer Segun introduces the Ghosts project- a gathering of written material detailing the birth of the Manchester club scene. Segun’s handout explains that the project “aims to capture the so-far unrecorded roles that the clubs in the Moss Side and Hulme areas of Manchester played in the heritage of the Caribbean community.”

Segun tells us how, in the fifties, African seamen set up social groups in the city which developed, over decades, into the nightclubs that we visit today. Soul nights emerged throughout the sixties, eventually influencing a range of music events- including venues playing drum ‘n’ bass and house. (House in particular is still played a lot in the city’s clubs.)

Segun hands us a transcript of an interview with Manchester DJ Hewan Clarke, who came to Manchester in “the notorious winter of 1969”. It gives us a taste of the styles and atmosphere of the city, from a popular DJ’s perspective- a man who brings people together to share something that they love- good music. It’s an era that I was, enviously, too young to be a part of.

“We’re going to look at Surrealism,” says Segun, enthusiastically. “Surrealism accesses our subconscious through randomness. It’s our egos that prevent us from properly expressing ourselves, but you can drop your ego and express through automatic writing- just let the pen hit the paper and keep going. Remember,” he says with emphasis, “nothing is forbidden in surrealism.”

We then performed three minutes of automatic writing on the theme of Manchester’s night life: Our memories of the city and it’s bars and clubs.

2002. Deansgate Locks is not yet the rammed street end populated by the moneyed scally and every other reveller. It’s spacious- The brick arches are clearly visible, even from the inside. The music- cutting edge house. The people- well-dressed and good-looking. It’s the first time I’ve walked into a bar and thought, yes, I like this place. I could be a regular here. It’s the only bar I’ve been to with a curved ceiling. The only bar with a full glass front. It’s Baa Bar, apparently the only cheap bar on the strip. Next door, Sugar Lounge is apparently the reverse. Your month’s wages for a glass of coke, populated by footballers and BBC types. Ying and Yang, practically. I neck another Woo Woo and watch the women.

Next, we took another sheet of paper and tore it up into small slips. Segun asked us to pick out, from our three-minute pieces, five words or phrases that we particularly like. We wrote them on the slips.

Then, we thought of another subject altogether- not night-life related. I chose Mixed Martial Arts. We wrote a few key words from the hobby onto the remaining blank slips of paper.

Following this, we took the photocopies of Segun’s DJ interview and cut it up into lines. We bunched up the lines of paper, holding them like a bunch of flowers, and cut them into chunks.

On three more slips, we wrote a body feeling, an action and an emotion- relating to either night life or our unrelated hobby.

We mixed up our slips like a DJ mixes records. Or like an amateur writer mixes clumsy metaphors. Cough.

Segun, his hands deep in paper slips, says “Pure surrealists would just read out whatever text they’ve got, no matter where it falls. But I think we should mix it around and find a phrasing that you’re happy with.”

I lay my slips out in lines on the table. It looks like the letter that Whitney Houston receives from her stalker in The Bodyguard. 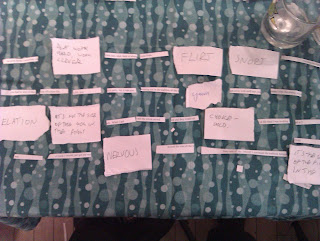 To see how it transcribes, check my next update. There will be a combination of three very different writing elements… but will it reveal anything about my subconscious? Could I- or you- interpret anything from the result? Comment if you think so…
Posted by CageFightingBlogger at 12:46

Great summary of the workshop! I love the bunch of flowers image!