There is no greater food on Earth than pizza.


I make myself pizza if it comes down to that drastic measurement.
-Corey Haim, actor

My situation may not be quite as drastic as Corey's was, but thankfully, cookbook writer Keda Black stuck my fave dish- Pizza Margherita - at the start of the book that I'm working through. I bought a couple of bases so I could be sure I'd get it right. Challenges: 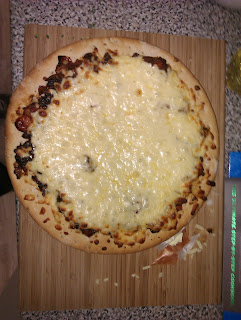 The result: a taste sensation. A thousand times more flavoursome than a Tesco pizza. There's plenty of cheese in this blog post already, but regardless: I'm moving forward here. I'm getting good in the kitchen, and no longer feeling like a culinary lost boy. (That's a Corey Haim tie-in joke. Never mind.)
Posted by CageFightingBlogger at 14:55