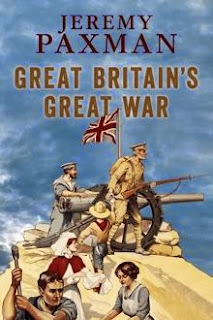 “There were some terrible generals in the First World War,” says Jeremy Paxman. “But the idea that generals would send men to their deaths... I don't believe it.”

It's Friday 29th November and tonight, in St. Anne's Church Manchester, the TV journalist and author is here to discuss his new book, Great Britain's Great War. As unaccustomed to standing in the pulpit as he claims to be, he commands his audience well as he describes how his great uncle Charlie, a soldier in World War One, was always a presence in his and his family's lives despite dying five years before his mother was born. This interest in his family history became more amorphous, and he started to find experiences and artifacts relating to past events, like interviewing a 105-year-old (now dead) who had survived German shelling, and some intriguing photographs taken during the outbreak of the war, which he shares with us tonight.

The collection of vintage photos starts with a peaceful scenes of ladies enjoying the beach in 1914, seemingly unaware of the placard advertising the war that they were now a part of, and would be for the next four years. Another was of a young man photographed outside his home who, like millions of others, had never left their county until the war. Then they died on the other side of Europe.

“Most wars had been fought a long way away,” he says, “and didn't particularly affect us. In 1914, it did. Most of our troops got sent to France and were badly outnumbered by the Germans. So the MoD need to recruit more people.”

That's where the UK used the iconic image of Horatio Herbert Kitchener.

“I personally don't like him,” says Paxman, “but he did say that the war would be won by the last million men, and he was staggeringly spot-on. But then, he did hate politicians almost as much as he hated journalists...”

The recruitment campaign, Paxman explains, used Kitchener's face, but the head of censorship wrote and organised all the advertising. This drive saw a huge surge of volunteers, but the MoD formed the battalions based on the neighbourhoods they were from. The drawback of this is that if in war, if a battalion fell under attack killing all the troops, an entire British village would be wiped out. The knock-on effect of this was that postmen were resigning, not able to take being the bearer of so much bad news.

It was easy to join the army in 1914, but incredibly hard to leave. What barred entry into the forces, however, was bad teeth- resulting in lots of poor people failing the tests. This infuriated a lot of largely patriotic members of the public. “What are we supposed to do?” quotes Paxman. “Bite the Germans?”

The recruitment general would advise them, “Come back tomorrow,” with a knowing wink. Or he'd say, “Come back when you're 'older'”, practically encouraging young men to apply underage.

But the soldiers still tried to keep the experience homely. The trenches were nicknamed in sections, after British places, like 'Piccadilly Circus'. As homely as the tried to make the trenches, they just couldn't tell their families how bad they actually were. Zigzagged to prevent invading troops from firing down the trench and killing many, the trenches were filthy.

“There was shit everywhere,” Paxman says, and he recites a poo-themed rhyming poem by AP Herbert, getting a few laughs. “I bet it's the first time a poem has been recited from the pulpit,” he muses.

“If your friend goes over the top and into the battlefield, he may get shot. But you can't go out and bring him back. You can hear him screaming.”

The church is dead silent.

“Eventually he dies. And when you do steal a glance over the top of the trench, the body is moving. What you're looking at is the rats that have gotten between his uniform and his body.

“To come through that, to not be mentally stressed by it... it's quite an achievement.”

In 1915 questions rose regarding the ethics of conscription. Most of the accounts of people finding exemptions were mysteriously destroyed, but the records Paxman found relating to those seeking exemptions from service are hilarious. Bathing machine operators were successful. A man trying to put off service until after his course of hair restoration was not so. Not a single person was shot for cowardice, though- 16 were sentenced to death, but no executions were carried out and all were commuted.

By 1917 there was a crisis of supply. German U-boats were sinking ships providing us with goods, hence rationing started. On 16th December, 3 German battle cruisers opened fire on Hartlepool. During research for the book, one of Paxman's interviewees- a 105-year-old who experienced the shelling as a child- described to him hearing the bangs, and mistakenly took it for a neighbour beating carpets. She walked out of her house and saw people fleeing the shoreline, pushing prams, being cut down in the street.

As the bombs continue to fall throughout the country, the nation becomes familiar with the sight of disabled people. After the war, when the soldiers have returned, the surgeons face a huge surge of workload. The Somme left 2000 men with serious facial wounds. Many surgeons realised that facial scars were a different type of injury to any other- that when a man loses his face, he loses his identity. So, in many of the hospitals mirrors were banned. Many patients never left the hospital, taking jobs as porters. Their own children feared them. They found work as cinema projectionists and any type of work that didn't need a great deal of public contact. And this led to the development of plastic surgery.

“Now plastic surgery is cosmetic,” Paxman says. “Then it was groundbreaking. It was something that... saved men, really. It helped them keep faith.”

The Q and A section begins. The first question relates to Syria.

“I was in Lebanon last month,” Paxman admits. “What's happening to children out there is heartbreaking. We should be helping. How precisely you help by firing a cruise missile I don't know. The vote was probably the right one, but I don't want to see Syria dominated by Islamist headbangers.”

A girl next to me asks to confirm whether Hitler sent people to leave mice and snakes in cinemas to stop people watching anti-nazi propaganda movies, and asks about soldiers' connection to wildlife.

“It's absolutely true that men really relished the sight of butterflies and birds, and admired their freedom. Away from the front line, they'd grow daffodils and acorns. When the soldiers stormed the German trenches, they found them in a better state than ours- lined with concrete and hung with tapestries. The Germans also had the luxury of choosing where they served.”

Question: Was the general public told enough information about the war at the time, through the media?

“There was no fierce scrutiny, but people cannot have been unaware of what was happening. Many people would return home to their wives and tell them their stories. But they endured until the end. Maybe the government should have an easy ride for taking the decision to go to war.”

The next question: How do we make World War One relevant to today's society?

“I discovered that schoolteachers are using Blackadder as if it were fact. Others are doing a better job.

“If you go to the memorials, the stories you will find portray a profound empathy. It's a very good way of reading a document archive. There's plenty of letters from the front to home, but not many going the other way. When you do find these letters, their banality is incredible. The contrast between these and the soldiers' letters is remarkable. It's amazing, and painfully moving.”

Question: I was wondering if you had thought about what you would have done.

“I have thought about it. As I was at that age, I would have gone. I was lucky enough to go to a school that had officer training- whether I'd have been lucky or unlucky I don't know. But we owe these men a memory. What these people did forged the society we know. There were some clever people, and some idiots, but that's human nature!" 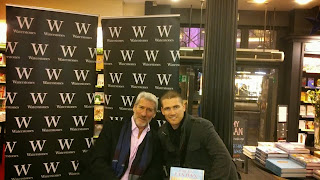 The signing was held over at the Deansgate Waterstones branch. Mr. Paxman himself came across as a surprisingly friendly bloke, dropping his hard-nosed hack image for his fans. I'm going to give the book as a Christmas present. He picked up on that without me telling him, and he left a Yuletide message next to his signature.
Posted by CageFightingBlogger at 18:56