No Selfies Please: Trevor Nelson in The Milton Club

"I might play some fucked up shit tonight, seriously,” says Radio 1's Trevor Nelson. “I might play Kool and the Gang or something, I dunno.” Well, I don't think he did bust out any “Get Down On It” or “Joanna”, but the Radio 1 hip hop DJ did dish up some underplayed classics, including SoulIISoul's Fair Play and many others.

Last night was Mr Nelson's third appearance in The Milton Club for their monthly Soul Purpose event, which has featured an ever-expanding list of high-profile DJ and singers. He didn't come on until quite late, letting resident Justin Fry take command for the first few hours. The night got busier later on than usual, with a lot of women filling the club. Mr Nelson eventually busted out a few rarities from the 90s hip hop scene, setting a great mood. He didn't seem to pay much attention to the customers, though, and my attempts to get a picture with him were mostly in vain due to the impenetrable crowd near the DJ booth. 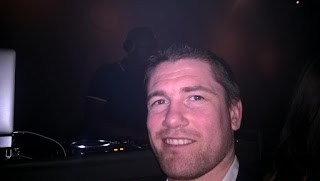 That said, there was a great atmos. I've been a Milton Club member for a year now and it's a place where I can always see friendly faces.
Posted by CageFightingBlogger at 17:24