Ghosts on the Dancefloor Part 2 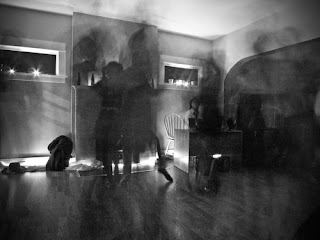 Ooooh I, I love the nightlife
I got to boogie
On the disco 'round, oh yea
The Commonword two-part poetry event concluded at Nexus Art Café on Monday 3rd October, again led by Manchester poet Segun Lee French.

Following on from last week's session, we delved deeper into surrealism and Manchester night life. We also incorporated themes of cinema and perspective to create another surrealist poem.

The exercise began with our own memories of night life in Manchester. We thought of a particular night that we personally remember. We described this memory with a beginning line, a middle line and an end line. Each line was to be no more than six words. I had:

Blonde hair. Young. Friend introduces her
I kiss her and swap numbers
It's only my second night working

We then thought of another scene from our lives, from roughly the same time frame, and applied the same technique. Here's mine:

Scene 4 was a mythical scene. We were asked to think of a myth or legend, and format it 6X3. So...

Narcissus sees a lake, walks up.
He sits at the water's edge
Sits there transfixed at himself.

It's a little clumsy but the point was to write fast, with whatever comes into your head, as is the surrealist style.

The fifth vignette was on a random subject of our choice. I chose the kickboxer circuit class that I attend at the gym. There were fewer restrictions on this one, allowing us to use short phrases of no specific length. We wrote out 5 of these.

Segun distributed a series of blank cards. We wrote each line from each verse on its own card. We then laid the cards out in order and swapped cards between rows and columns. This gave the words a surreal, mixed-up quality.

We wrote out the new text on a sheet of paper, double-spaced, and looked at whether there were any themes that emerged in the writing. With the subjects combined, was anything pertinent?

Mine seemed to have a theme of frustration or anger, or perhaps longing. Hmm. Segun suggested we add in a few words throughout the poem (hence the double spacing) to strengthen the theme.

And there you have it. One surrealist poem. I'm again uploading my poem as a separate blog post so that it stands alone. Those who haven't read this explanatory post can make their own wild conclusions...

Another great Commonword class. Contributors also got a chance to read out their poem on Manchester's Unity Radio on Thursday 6th. I was tied up. Gutted. I'll be keeping my eyes open for Commonword classes in the future as the teaching, finished products, networking opportunities and enthusiasm of everyone involved is superb.
Posted by CageFightingBlogger at 22:43