I'm on leave this week! I've taken advantage of it and thrown up a few midweek meetups. If you can make it, get involved.

Sick! Festival is in full swing in Manchester. It's a series of events raising awareness of metal health, and describes itself as 'the antidote to the physical, mental and social challenges of life.' Some events are free, others not. There's a meetup group offering ticket deals, or at least they say they are. There's no meetups planned with the group, so who knows. It's certainly worth keeping an eye on. Twitter here.

Manchester Cool Bars are back out tomorrow night. We're heading to Taboo, Tiger Tiger's student night. Hugely popular and cheap with a great atmosphere. £1 entry on guestlist. Book off Wednesday and come out with us!

The party don't stop. Wednesday night we're heading to Hot Mess at Revolution on Deansgate Locks. Hot Mess has been around a while, but it's the first time Cool Bars have been (and the first for me personally too). Come get some £1.50 drinks! 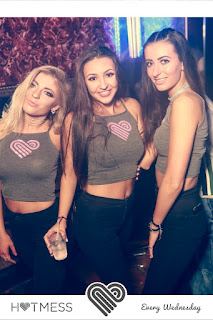 Thursday afternoon we switch things up a bit. Not a party, but a book signing. Former UFC fighter and current UFC commentator Dan Hardy drops into Waterstones in the Arndale to sign copies of his autobiography, Part Reptile. The signing starts at 5:30pm. Be there early!

Any Ex on the Beach fans? MTV reality stars Jack Devlin, Becca Edwards and Nicole Bass are making an appearance at Flirt, Birdcage's Friday night party. With £2 drinks it's worth a shout whether you watch EOTB fan or not. And, yes, you've guessed it, Cool Bars are headed there too. We're starting in Mambo's around the corner. Be part of it!

Saturday night is one for the boxing fans. Local lad Anthony Crolla is on the warpath. He wants his lightweight title back. The rematch against Venezuelan Jorge Linares on Saturday night looks to be an explosive night. Cool Bars will be in Portland Street's Genting Casino to watch the action, streamed live from just a few streets away in Manchester Arena. Join us!

On Sunday afternoon I'll be polishing up my shorthand skills at Writers Connect, the creative writing feedback group. It's been a while since I've attended so will be good to get back. The warm-up exercise will be a good opportunity to check how effective my teeline is (clue- not very).

And that's your lot! There's more going on next week, and by next Monday there'll be more still to tell you.
Posted by CageFightingBlogger at 09:28