A busy busy week as always. On Tuesday Northern Quarter's Kettlebell Kitchen turned one, and offered free brownies to those who dropped in. I had a great kettlebox with mashed sweet potato, steak and nuts. I then stayed in town for a meetup with Manchester Cool Bars to Tiger Tiger for their Tuesday night event, Taboo. Good cheap drinks and a fun night. Facebook pics here.

Wednesday night was planned as a trip to Hot Mess on Deansgate Locks, but the bar, Revolution, wanted student ID. This ruled us out so we shot across town to The Birdcage, where Voodoo was in full swing. A nice night, but there were too many guys and the décor needs a touch-up- part of the handrails were missing, for one thing. I first went eight years ago and the design was outdated then. Good atmos though, and friendly people.

On Thursday night Manchester welcomed former UFC fighter and current UFC commentator Dan Hardy. The welterweight MMA fighter and the lead on UFC analysis segment Inside the Octagon dropped into Waterstones in the Arndale to sign copies of his newly-released autobiography, Part Reptile. I had a chat with him- it was good to hear he knew my old MMA instructors Dave and Ian Butlin. Dan seemed like a top bloke. 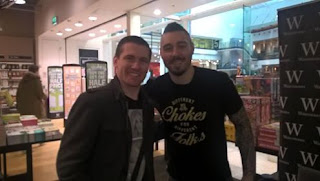 Friday night: Manchester Cool Bars were out in force again, this time to The Birdcage for Flirt, the weekly Friday event. We started in Mambos next door, a nice and relatively new bar. If they just got a joiner to look at their toilet doors it'd be an all-round ideal starting place.

The night in Birdcage was touted as a meet-and-greet with three cast members from MTV's Ex on the Beach. (See the Facebook event.) I saw a queue at one point, but couldn't actually see who was at the end of it. There were barriers cordoning off one area, but no announcement on the mic that they were there and, if they were, they didn't hang around long.

I was equally disappointed with the clunky bootlegs and overplayed RnB that the DJ was churning out. But hey, it's Friday night in Manchester. Slim pickings.

Pics will be here.

Aside from the above, the night was a good one- good looking people, a friendly crowd and a fun night.

Saturday night: Cool Bars again headed out, this time to Genting Casino to watch local lad Anthony Crolla against Venezuelan Jorge Linarez. Predictably, Crolla lost, but he took a good beating before losing on points. He's a tough bastard. Both men are.

There were a few no-shows from the Meetup group, which is a shame, but a good night overall. Nice to break up clubbing nights with something different.

Revisiting Kettlebell Kitchen to finish off: they're looking for a thief. Do you recognise him?
More to come!
Posted by CageFightingBlogger at 23:25